by The Tiger Lillies 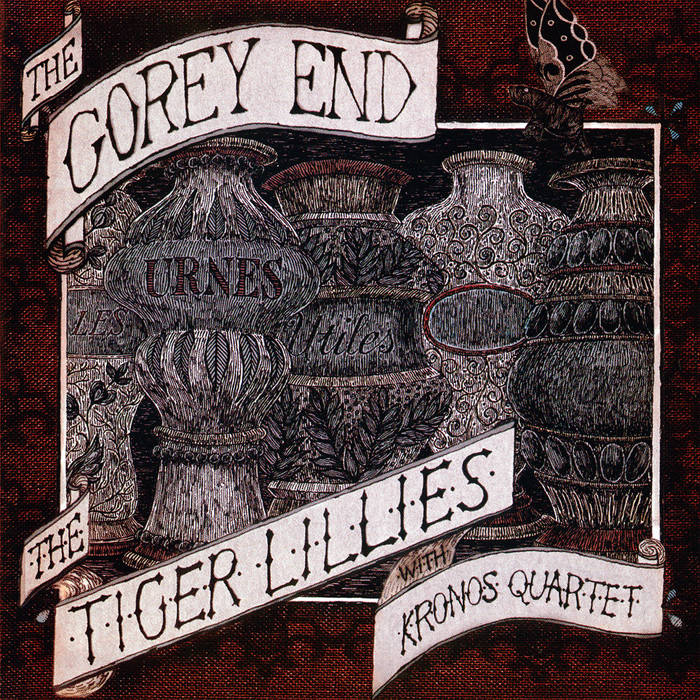 loopyl1968 So so happy this has been re released! Gutted I didn't get the Gorey Green LP though as it had sold out!! A brilliant album and I've got the Bat Black ⚫ vinyl coming instead. So missing live gigs from you talented and crazy guys! 🖤💜🖤

The Gorey End, Writer / Illustrator Edward Gorey enjoyed 'Banging in the Nails' so much he sent us a large box of his unpublished stories, some of which we adapted and turned into songs. Then, before he could hear them, Mr Gorey passed away. So sad. But here are those songs, with the Kronos Quartet providing strings and barks.

Originally released in 2003, The Gorey End quickly sold out and has been unavailable since, helped in no small part by its nomination for a Grammy (best classical crossover album) and the brief stage run featuring Eleanor Bron and other hands. Unpublished works by Edward Gorey were adapted to song lyrics by Martyn Jaques, keeping to the author's inimitable style, with the Tiger Lillies' music added to by the Kronos Quartet on most of the tracks.

The world of The Tiger Lillies is dark, peculiar and varied, with moments of deep sadness, cruel black humour and immense beauty.

Bandcamp Daily  your guide to the world of Bandcamp

New sounds from Mavi, Ivy Sole & Moderator, plus AJ, the One joins the show, for her latest release